In response to the profound unhappiness that my mother was experiencing in her residence in aged care, before Christmas she took things into her own hands.  Firstly, she asked me to make contact with other aged care places she had looked at to see where she was on the waiting list.  No good news was forthcoming from this – she was still on the list… and waiting.

Mum had determined that she did not want to be in a place that was run under the profit motive, as her residence then was, as she blamed this for the low quality of care/low carer to resident ratio.  As well, she wanted somewhere that was physically endowed with gardens and outdoor areas.  As I was moving to Bundoora, proximity to me was also a factor.

A place that was mentioned by her carers was Vasey House in Bundoora, run by the RSL and a not for profit residence. What we found the following week on a regular weekly tour that we attended was a large home, organised into wings each with its own dining area, multiple activity spaces and surrounded by gardens.  The individual rooms were a bit small, but otherwise it looked ideal, and we were told that there was a very low turnover of carers.  We also took the time after the tour to talk to the acting DON, as we knew that building a relationship was a key to being accepted into anywhere.  Miraculously they also indicate that they had rooms available.  We took the application, and made sure it was completed and returned by the end of the week. We did not quite believe they had rooms available, and were resigned to an ongoing wait.

Lo-and-behold the following week Mum was offered a room! We looked at the room, and despite it being smaller than her current room, she was determined to take it to move from where she was.  With the help of my brothers, the move was organised for the following Monday.

In the process of moving Mum let go of her bidet, her desk (there was a small one built in to the room), her small fridge and the cabinet this was standing on, and several weeks after moving in, also swapped her book case for a smaller one.  All this to adapt to the smaller/different footprint in the room.

On the plus side, the over the toilet chair they provided suited Mum and she was able to get off under her own steam –  she had not been able to do this for a few months since a fall when she hurt her foot so this was a real achievement.

The first week was a bit of a shocker, for both the carers who were not used to someone with Mum’s type of disability or her forthrightness is speaking up for herself and what she needs to facilitate her own care, and for Mum having to deal with lots of new carers and explaining her needs and wants. But they all got through this.

Gradually things have settled down, as Mum and carers have go to know each other.  As well, the kitchen has made an effort to cater to mum’s likes, getting her good plain yoghurt, and making her nice salads.  Food has been of a much better quality, and they have even catered to family visits with separate tables for us to eat together.  My older brother said of one meal of a variety of fish bites and salad that it was as good as what he would have paid $18 for at his local pub!

Mum is also having her meal in the dining room with others, which she never did at her last place, and has participated in a number of the activities provided, especially one where they do a crossword on a big board.  She has also loved times when piano music has been played by guests or residents. 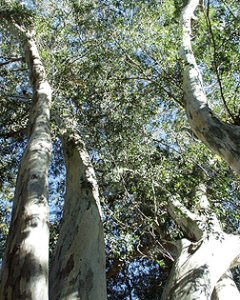 Most of all Mum loves the garden, being able to get outside and sit in a shady spot, with fresh air and trees around her.  She told me the other day that there were 14 trees there, mostly small gums.  She said it with wonderment, that she could be outside, and enjoying all these trees around her. I know some of them are outside of the fence, but to her it is her own forest to sit and be in… and we know the healing effect of nature.  This is in contrast to 4 years of only having an outside area in a carpark adjacent to a busy road, where several gums that were there were cut down because of danger to the cars. She is in heaven in comparison. She also wanders around the lovely gardens between each wing. She can also go out the front door of the complex and enjoy views across parkland to distant hills.  Having a vista was also something she sorely missed at her previous place.

She is finding some friends amongst the carers, and amongst the other residents, and my younger brother commented this week that she looked the best she had in ages.

There are still some things not exactly right. Mum is sensitive to light and noise at night, and she is having problems with both of these in the location of her room. She has asked to be considered for a room change.  This will be considered by the new DON.

But ultimately, there are so many positives for Mum in the move that it was definitely the right thing for her to do.  I’m not sure if many people know that they can actually move if the residential care they find themselves does not suit them.  Many people in aged care have an attitude of “I won’t complain – I won’t rock the boat”.  With more emphasis being placed on resident choice, residents taking it on themselves to move to better places might become much more common.